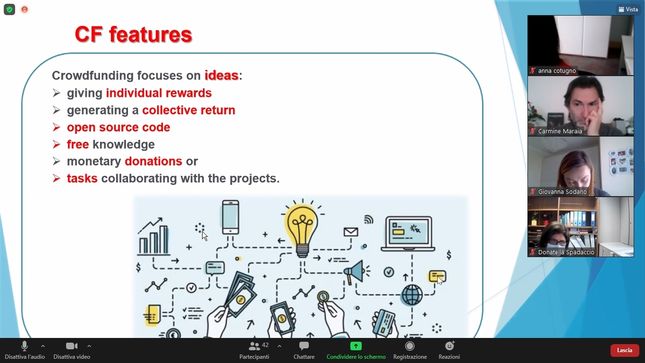 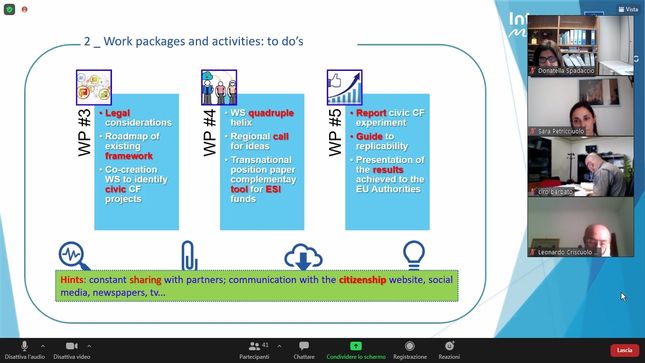 Last May 17 took place the co-creation workshop for Legal considerations on Civic Crowdfunding of Region Campania. Organised together with its in-house Foundation IFEL Campania

Last May 17 took place the co-creation workshop for Legal considerations on Civic Crowdfunding of Region Campania. Organised together with its in-house Foundation IFEL Campania and aimed at informing and training regional administration executives and officers on the use of Civic Crowdfunding in the Blue Economy industry the workshop was attended by over 40 regional executives and officers belonging to several departments of the Administration (e.g. Agriculture, ESF and ERDF MAs, Research, Territory, Legal, Development , Planning and Tourism.

The meeting Agenda foresaw the presentation of the Blue Crowdfunding Project, which was carried out by Ms. Carmela Cotrone, Expert in EU project management of Campania Region;, the Crowdfunding tool issues to be addressed with special emphasis to be placed on their legal, financial and operational aspects were developed Mr. Gaetano Di Palo, Chief Research Officer of IFEL Campania. The workshop also aimed at showing several success stories of Civic Crowdfunding developed in the Region which were selected and commented by Ms. Sara Petricciuolo. former fund raiser of Banca Intesa Sanpaolo, and at describing a harvest of examples of the most used web portals hosting campaigns, which was carried out by IFEL Campania Data Analyst Ms, Chiara Caprio.

Ms. Cotrone emphasised three of the Project’s expected results: i) the capacity building of Regional Authorities in the use of Crowdfunding; ii)  the creation of a transnational Euro-Mediterranean Cluster to support Crowdfunding activities in the Blue Economy industry; iii) the integration of the use of Civic Crowdfunding in Cohesion Policy 2021-27.; plus the significance of an integrated approach of the Project developing along three dimensions: stakeholders of the fisheries and aquaculture industry, the social dimension of the people living in the coastal and island territories, and finally the dimension of the crowdfunding platforms.   Mr. Gaetano Di Palo went through the main legal and financial issues related to Crowdfunding  describing the typical funding models (Donation, Reward, Lending and Equity), as well as some of their hybridations, and commenting both European and Italian legislation on the matter, with particular consideration to those applicable to Civic purposes.  Ms. Sara Petricciuolo, presented examples of successful Civic crowdfunding, such as Let's give new life to Pontecagnano Station , Un Futuro per Bagnoli – Docufilm, WWF Cratere degli Astroni Oasis Nature Reserve, "Figli in Famiglia O.n.l.u.s.". identifying ways to achieve optimal results, the inner limitations and advantages of the tool and useful suggestions for the application of the civic crowdfunding and match-funding model. In particular, she also presented a match-funding scheme used by the City of Milan in its Civic Crowdfunding Campaign Program. Finally, Ms. Caprio, browsed through several web platforms showing some examples of portals offering Civic crowdfunding services, commenting the visual aspects and web-engagement choices and policies.