The main objectives of this hybrid workshop was to discuss the 8th Cohesion report of the European Commission, to expose the position of INSULEUR regarding future Cohesion Policy and Entrepreneurship in Islands, to understand the position of the different institutions of the EU on this topic and, finally, to give the floor to the audience (representatives of local insular CCIs, other representatives of Islands Authorities) to express their preoccupations and problems in designing and applying this Policy.

INSULEUR held its Annual General Assembly in Brussels where its CCI members finally met again in person after 2 years and had the privilege to extend their family by welcoming one new member: Cámara de Comercio Gran Canaria.

The GA was followed by a hybrid workshop on entrepreneurship and Cohesion, moderated by George Asonitis and Lina Konstantinopoulou which set the tone and exposed INSULEUR’s and CPMR - Conference of peripheral maritime regions’s commonly shared and enduring stance towards the topic addressed, while President Roussos from Chamber of Cyclades, President Vangelis Myrsinias, Nikos Reizakis from Rethymnon Chamber of Commerce and Sakis Zlatoudis from ΕΟΑΕΝ intervened for giving among other first-hand insight of the issues affecting islands entrepreneurship but also for insisting on the importance of participation to networks and consultations to ensure that insular Chambers voices are heard by governments and EU institutions.

In its opening speech, Stefano Mallia from EESC Employers' Group insisted on the fact that the future of cohesion policy must include the adoption of a regionally differentiated approach, adding that cohesion funds need to contribute to a better context for start-ups and SMEs and that regulatory package should be made simpler.

INSULEUR's President Joseph Borg and  The Gozo Business Chamber highlighted that "Islands have particular handicaps which need to be addressed.  Their structural and geographical characteristics give rise to additional costs which slows their development.  The COVID-19 pandemic has continued to show the weak structures within islands and their severe limitations.  More needs to be done, and this needs to  be acknowledged in Cohesion Policy and in specific instruments which try to address these limitations."

Eleftherios Kechagioglou put the small islands at the heart of the discussion by reminding that entrepreneurship is one of the key pillars for their development and that for this reason, their standards of living must be improved which means they therefore need proper rules, laws and regulations for development taking into account their specificities but also a proper and clear definition of what a small island actually is.

Josianne Cutajar from the European Parliament addressed the workshop on how to assist entrepreneurs coming from European islands and the need to focus on tackling extra costs and on avoiding unnecessary burdens to help businesses in particular SMEs thrive in insular regions.

Claudia Guzzon, Executive Secretary of the CPMR - Conference of peripheral maritime regions Islands Commission, reflected on islands' competitiveness disadvantages and the need to acknowledge and address the disparities resulting from EU measures, such as REPowerEU and Fitfor55.

Irene Mikelis pointed out to the weight of SMEs in the EU economy, the causes of the competitive disadvantage for insular ones, insisted on the need for a long-term vision and a specific strategy for EU islands as well as a full application of art 174 TFEU in all EU policies.

Islands’ potential as test beds and laboratories for innovation and technologies was moreover highlighted, putting forward the achievements and lessons learned by the implementation of 2 ERDF co-funded Interreg MED projects Compose Plus and BLUE Crowdfunding - Interreg Med Project in the fields of energy efficiency, blue economy and alternative sources of financing. 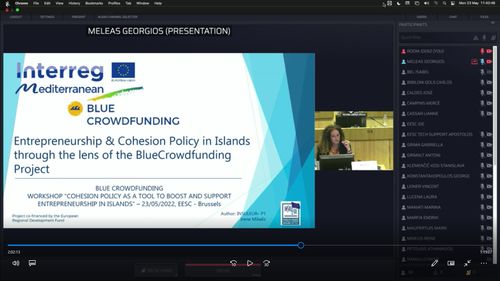 Vincent Leiner, DG REGIO from European Commission, took the floor to update the participating CCIS and institutions on the comprehensive framework set up for supporting insular enterprises and the tailored programmes targeting islands in particular, for driving forward their economy diversification and transition towards greener and smarter initiatives but also towards upgrading of skills. The challenge now, he added, lies in using these resources to the best of their potential for islands, although as he also mentioned, one difficulty lies in capturing a clear picture of the situation of islands due their diversity, varying from Island-states to very small islands.

Marie-Antoinette Maupertuis highlighted the need to have right indicators (such as competitiveness index) going beyond GDP only, to assess territorial impact of legislation in islands, the need for an Island desk set up as a single-entry point within the European Commission as well as the need for state aid rules exemptions for Islands and their businesses that would answer their inherent handicaps linked in particular to transport, energy and connectivity.

Ioannis Vardakastanis EESC - European Economic and Social Committee also reminded among other that for the past 2 decades many islands have suffered from economic stagnation or decline, failing to catchup with the developing rhythm of mainland regions. While convergence is accelerating within the EU, regional disparities are increasing when it comes to islands. Recognition, flexibility and priority for islands in EU policies are key words to secure their survival and competitiveness. Cohesion Policy however and unfortunately still does not offer a comprehensive approach towards all issues raised during the workshop. The role of National states and EU institutions was presented as absolutely crucial in addressing those.

This hybrid workshop was organized by Insuleurin partnership with the EESC - European Economic and Social Committee, and in collaboration with the CPMR - Conference of peripheral maritime regions Islands Commission and the ESIN European Small Islands Federation.