Campania Region represented the Blue Crowdfunding Project at the Webinar “Processes of capitalisation of results between Interreg Programmes in the Mediterranean area. 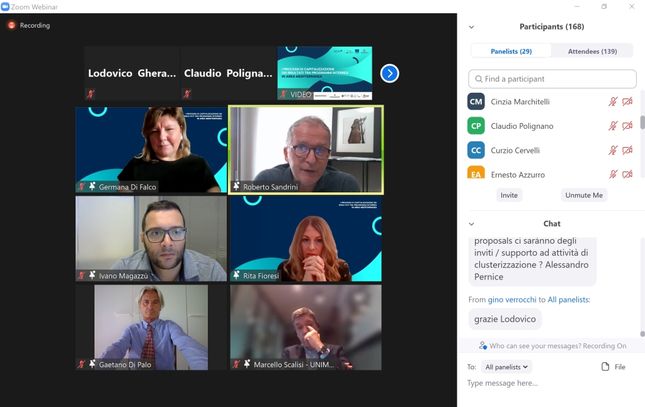 More specifically Mr. Di Palo was invited to take part to the “Roundtable #1: HUMAN CAPITAL - The role of human resources in the sustainability of results and the creation of synergies”, which also hosted, Roberto Sandrini, of Venice-Rovigo Chamber of Commerce, representing the PROTEUS project, Marcello Scalisi, of UNIMED (Union of Mediterranean Universities) and Ivano Magazzù, of INTERACT Programme.

Mr. Di Palo outlined to an audience of over 170 attendees the Blue Crowdfunding Project major objectives, actions, partners and outputs. Furthermore, solicited by the Roundtable moderator Ms. Rita Fioresi (Interreg MED, National Contact Point-ART-ER), he also described some interesting interactions originated among different regional departments involved into the project actions during the Blue Crowdfunding activities. He explained the growth in terms of human capital based on the interactions among members of the Project working-group, belonging to diverse Units of the regional administration (e.g. Agriculture, Research, Environment, Legal, Planning etc.) and yet collaborating and exchanging ideas, knowledge and experience to the benefit of the whole team – and of course for an effective management of the Project itself.

As then invited by the moderator, Mr. Di Palo also portrayed how, in his opinion, the chief financial and legal aspects of Crowdfunding operations, and their possible declinations, can be replicated in other contexts. He placed particular emphasis on Civic Crowdfunding as an additional tool for carrying out local development policies, pointing out both opportunities and possible drawbacks usually implied by the operation. He ultimately stressed the strong need for knowledge and skills to be fostered via studying, training and practicing, since, he maintained, competence is necessary for any possible successful adaptation of different crowdfunding formats to local contexts; especially when involving local public authorities as leaders or even as mere supporters.